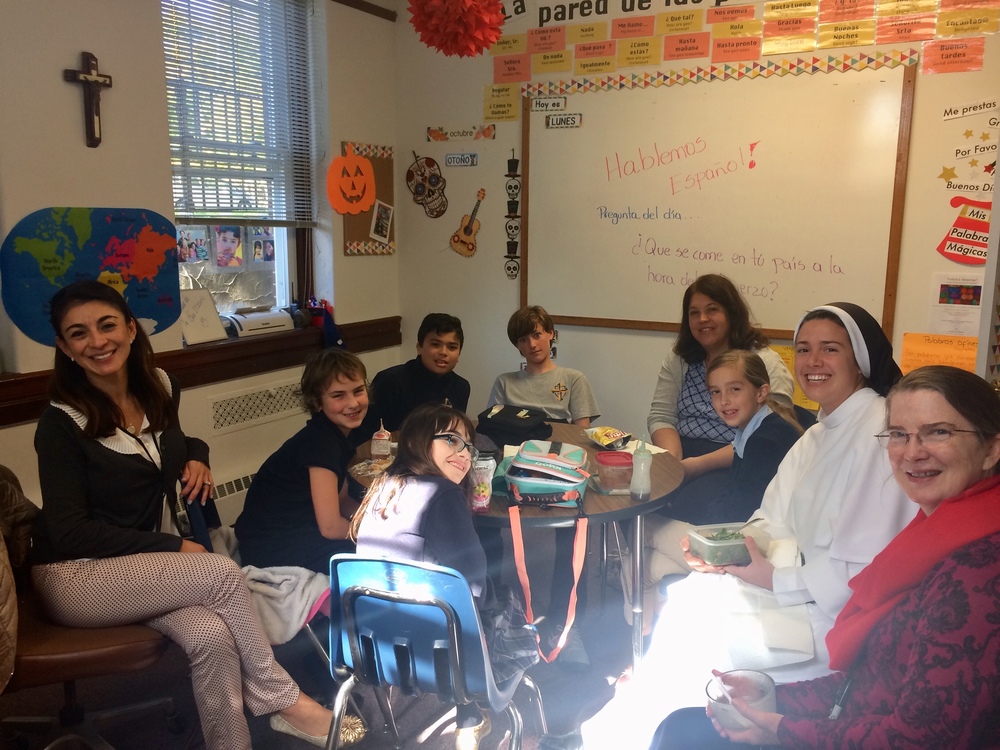 The St. Pius V Spanish department recently launched a new Spanish-immersion initiative which will consist, in part, of weekly Spanish-enrichment lunches for the SPV Community.  Once a week, students, faculty, and staff have the opportunity to gather in Señora DiIorio’s classroom to practice listening and responding to questions in Spanish and to converse with each other about Spanish culture.

The idea stemmed from Señora DiIorio, one of SPV’s Spanish teachers, who says that she wanted to create a time where students who speak Spanish at home can become comfortable doing the same at school.

“Students often speak Spanish at home but not at school because it is not their societal language.  My hope is that lunches like these will make them feel that speaking Spanish at school is comfortable and cool”, she says.

Our first lunch was held on October 21 and was a huge hit.  Children grades 5 through 8 joined Señora DiIorio and other faculty members including Señora Thibeault, La Hermana Maria Francesca, Señora Wilkins, and Señora Galván during their lunch period to enjoy their meals and Spanish conversations.  Señora Wilkins noted that the children were especially intrigued by having lunch in the company of teachers and staff.

Señora DiIorio also notes that the lunches attracted not only Spanish speakers but others as well.

“Some students don’t speak Spanish but came to listen and try to understand the conversation”. In the future, students from Pre-K 4 and Kindergarten will be invited to practice their Spanish as special guests.