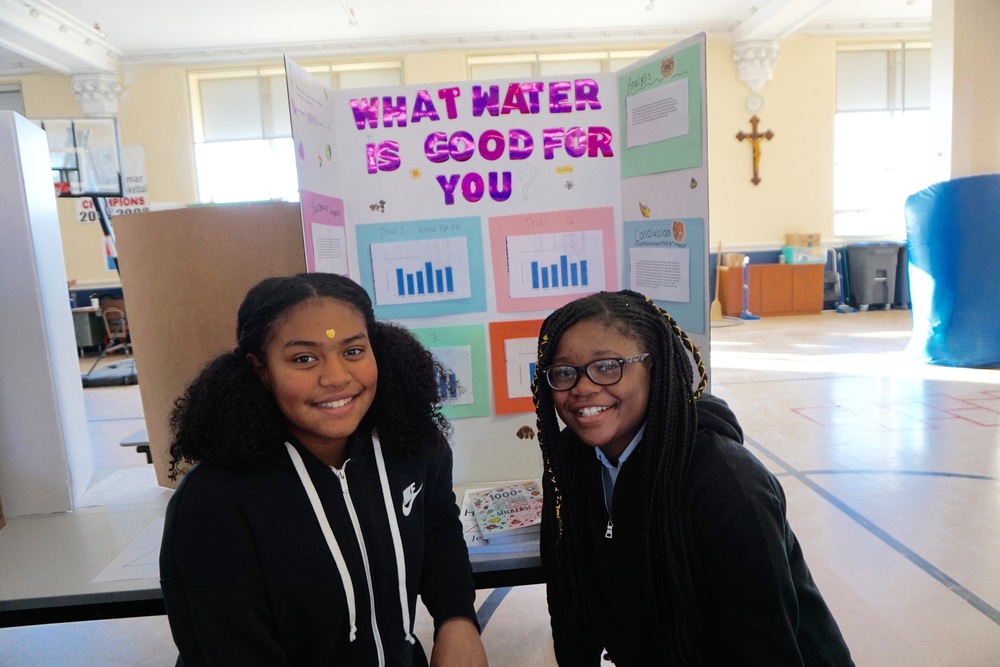 In January, St. Pius V School hosted its annual middle school Science Fair.  Our 6th and 7th graders spent months preparing their science projects for this special day.  Each student chose a topic of interest that related to the scientific method and designed an experiment that they could execute and report on.

The day of the Science Fair, these students brought in their poster boards and set them up in the gym.  Throughout the morning, they presented their projects to their peers and to a number of judges, who would ultimately select the ten students who would move on to the state-level Science Fair competition.

One of our judges, Professor Melissa Silvestrini, an undergraduate Professor of Biology at Providence College, was thrilled to see the “the wide range of projects” that our students presented, and was very happy to introduce possible future careers to students in which “they would not have to stick solely to one scientific field.”

“Microscopy,” she gave as an example, “is the perfect mix for those interested in art and science!”

Our students also had the opportunity to speak to undergraduates involved in the sciences at PC. Christopher Lautato, a freshman, was happily surprised by our students’ creativity.

“I never would have thought of these ideas at that age,” he said.

Students developed their projects under the direction of Ms. Aileen Kraus, who recently graduated from PC and is also in the PACT (Providence Alliance for Catholic Teachers) program.

“There is this notion that you’re either good or bad at science,” Ms. Kraus said.  "But here at St. Pius V School, students pick a topic that they’re interested in, and, by the end, they realize how much they’ve accomplished.  They realize not only that they can do science but also that they are scientists.”

One 7th grade student recognized the effort she put into her water testing project: “I am a scientist because doing this project was a lot of hard work and research.  I had to change my variables and that took a lot of time and effort.”

Our Science Fair is but one example of how St. Pius V School seamlessly inculcates the values of academic excellence with creativity in our students.  Although students were nervous about discussing their experiments with new people, they were genuinely excited to share what they learned, and did so, as Sr. Maria Francesca, O.P. mentioned during the awards ceremony, with such eloquence and wisdom.